Chad, a St. Louis native, is a thirty-year-old, very successful, and very handsome consultant. He is also a recent newly single man after he and his longtime girlfriend of six years called it quits over Chad’s newfound love for social media, which became too much for Courtney to handle.

After a couple of months of trying to win her back to no avail, Chad’s doggish ways returned with a vengeance. New to the social media world, his best friend Chris, who introduced him to the new platforms, warned him to be careful because some things and people are not what they seem in this virtual world. That warning though unfortunately fell on deaf ears.

As Chad continues to meet and seduce new women, he will soon find himself in a number of situations where he has bitten off more than he can chew, but there is one rabbit hole with multiple tunnels that if he falls in, he will realize that it will be nearly impossible to climb out of when a revelation shocks and enrages him to the point of destruction while another may have his life and freedom on the line.

Even if he gets out of one situation, will he be able to overcome the other? Will this ladies man listen to his best friends’ advice, or will he let his addiction to this new world continue to let him dig himself deeper into a hole that he can not escape? Are his friends warning that people and things are not what they seem closer to home than Chad could ever know?

There are many lessons that Chad will take with him in the end, but will it be too late to even matter? 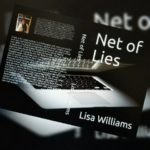