Misty Lewis, a twenty-five-year-old, recent graduate student of Florida State University has found herself in the fight of her life. Her dreams of being a nurse have been put on hold as she tries to prove her innocence of the murder of her on-again, off-again friend, Elaine Stevenson.

Only two months into her nursing career, Misty now finds herself locked behind bars in a different type of institution. Not only does Misty have to fight to prove her innocence, but she also has to fight for her life in a world that she does not know anything about until she finds an unsuspected guardian by the name of Bags.

Misty has only seen the good in people until Bags helps her realize the other side of people- the cruel side, while she tries to help her uncover her foggy past.  Until Misty can get this resolved, she has more than enough time on her hands to realize exactly what troubles jealousy, envy, and hate can really cause.

What really happened that fateful October night? Will Misty’s pleas of innocence continue to go unheard? Will she ever return to the world that she knows, or will this life behind bars be her cage as she lives out her fifty-year sentence? This suspenseful thriller will have you begging for more all the way until the very last page! 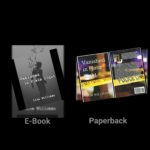